Hear No Evil, Speak No Evil: Thoughts on Censoring 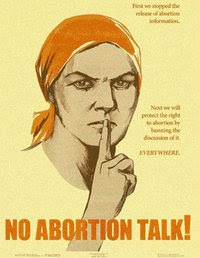 With the March for Life coming up in D.C. (which I have to wimp out on this year) I've been thinking about what, if anything, I should tell my four year old son about abortion.

Let me start off by saying, I never put a thought into censoring the abortion topic for children until I taught at an ultra conservative Catholic school some years back.  The school was wonderful and it taught me a lot about what other Catholic parents do- it's just that I wasn't used to some of the things they expected.  So at this school, we were not supposed to talk about abortion at all- even to my class, which was fifth and sixth grade.  Most of the kids knew what it was, but for those whose parents didn't wanting them to see or hear any evil, we weren't supposed to spoil their innocence.  I'm all about preserving innocence, but that threw me for a loop.  Fifth and sixth grade??

Which brings me back to the topic of how much should you censor for young children when were talking about an evil that exists so prevalently in our world today? I am seriously wondering, so your advice would be helpful! Do I tell my four year old that some people kill their babies today?  He was so distraught when he found out that King Herod killed the baby boys when Jesus was born.  Is this evil something he really needs to know? Or should I just stick to the "life" side of things and only talk about what a gift babies are to the world?

Of course, I would never show him pictures or go into the details about what happens to the babies, but I am wondering if I even tell him what abortion is before he asks.   Thoughts?
Posted by Sarah Harkins at 7:08 PM

Well, he was concerned when he heard about Herod killing babies. Maybe if you think you should tell him , tell him that some people don't love babies and don't want them so they kill them . questions will probably arise from this subject and if your 4yr old like's to know about things and learn tell him.
But in the end your his Mum and this decision rests with you and his Dad.
~ Autumn.

I personally think it's too young. I know a lot of friends who tell their kids from a very young age, take them to the rallies and they see the pictures. For me, I just think it's too young. I will wait until my kids are a little bit older and more mature before I will tell them about it. When I go to a pro-life meeting, I just tell them I'm going to a meeting with people who love babies. Maybe I am wrong, but I don't think they will have any less love and respect for life if I wait until they are a little older.

I don't think I would intentionally start a conversation with him to explain it.... but if in the course of conversation he asks what abortion is then I would give him a simple explanation.

I think my kids heard the term abortion in church and asked what it means. I told them briefly that it is killing a baby before it's born naturally. We believe it's murder. They were maybe first or second grade.
I want the kids to hear it from me rather than somewhere else. I try to be honest with them about life the world they live in.
Julie M

We haven't even told our second grader what it is. I remember learning what it was when I was much older, and I was still confused because I thought the doctors could make the decision for the pregnant woman.

We talk a lot about what it means to be pro-life (loving all forms of life from babies to old people) and why we vote for certain candidates. My kids love to tell people that we didn't vote for Obama because he doesn't love babies enough :)

They only need to know as little as possible to satisfy their curiosity while still answering their questions. I would just enforce the idea that we need to protect all the life that God creates.

I have a fifth grader boy right now and we didn't discuss it with him until the presidential elections as well. He goes to a public school and Obama was the one his friends raved about and I had to expplain without going into too much detail, how he supports Planned Parenthood and a woman's right to choose abortion. He was horrified that woman had the right to end the life of their baby.

That's a heavy burden for kids to deal with at a young age... especially since it's so prevelant in our society.

I just started a blog a couple of weeks ago to talk about these important topics. I was happy to see you do too!rosarymom.blogspot.com

We didn't tell our kids either at that age. Hailee was 7 and Gianna 4 when the elections were happening and kids were raving about Obama too. I just told her that some people think it's ok to take babies out of pregnant bellies before they are ready to come out. Which she then said "they wouldn't live!" I said exactly it's very sad. So we explained that we wanted to vote for someone who was for life. we didn't go into details or anything. But she knows what life stands for :)