OK, this is my last *brand* new bead before I open my store. I have to make repeats of two other beads, but hopefully, they will take less time.


This rooster bead was so much fun to make. I researched colorful rooster paintings before I settled on a color scheme and design.  The rooster itself, is made with what I call, a painter technique. I don't think it has an official name, but you use many different shades of clay and put them together like a painter uses different strokes to paint a picture. It is actually quite simple and after I mixed the colors and shaped them into tear drop shapes, I was done assembling the rooster in no time.

After the rooster was finished, I couldn't bare leaving it with a boring all white background. There was just so much space to be filled and so much potential! I decided on Polish folk art flowers called Wycinanki flowers that are made by cutting paper.  You often see roosters in folk art and Wycinanki, so it was a natural fit.

I spent one day making the flowers- not too complicated. Then I spent the whole next day arranging them into the crevices of this rooster! I did not anticipate the work and thought involved with fitting them in just right. In the end, it was worth it.

This bead is so me. I'm attracted to colorful things like a moth to the flame.  Don't be surprised if you see this bead on an entire line of products- pins, earrings, hair pins, pendants, and bracelets- that is when I get around to it. 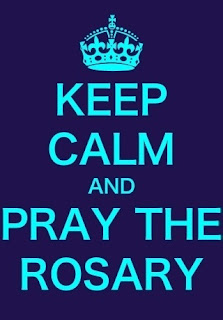 Next week, I open my shop, start our homeschooling year and direct a Montessori classroom (for which I have no experience or training) one day a week at our homeschool coop.  Life is good. My new motto is "Keep Calm and Pray the Rosary" It's the only way I'm not freaking out right now.

P.S. The rooster is traditionally a symbol of the resurrection.  Honestly, I see it more as a symbol of God's mercy, but
this website has a very nice bit about the rooster as a symbolize vigilance: 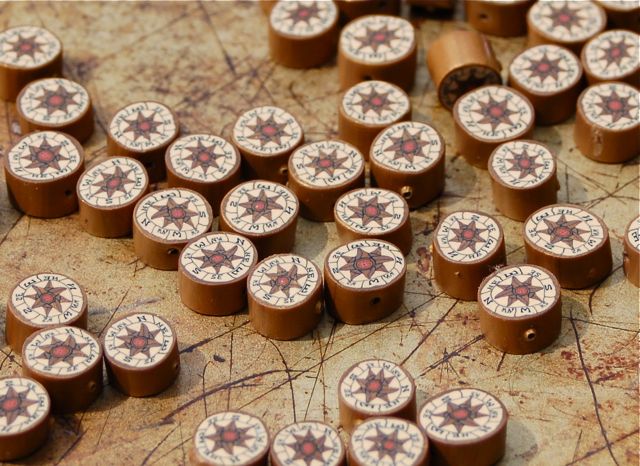 I've had big goals for my clay bead collection this summer and now that summer is coming to an end, I'm realizing that I won't get all the beads that I wanted to get done, but I will have a decent amount for the start of the new season.  Here is my new compass bead. You may be wondering what the compass has to do with anything- it symbol for our life here on earth as travelers.  We know this is not our permanent home and I hope this bead will be a reminder of that.  We are on a journey toward sainthood, but without a compass to guide us, we will be lost.  So this compass can represent any and all of the things that guide us toward Christ: the Holy Spirit, the Catholic Church, the Bible, the Sacraments, Mary, the Saints, etc.

Here's the process for making this bead: 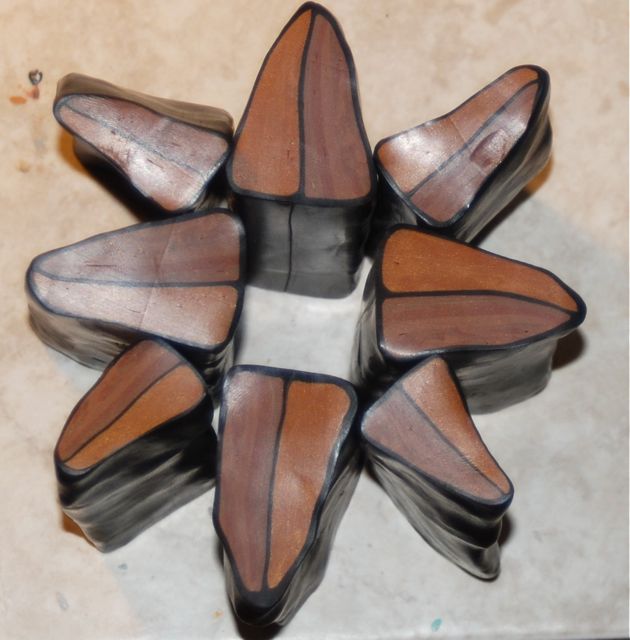 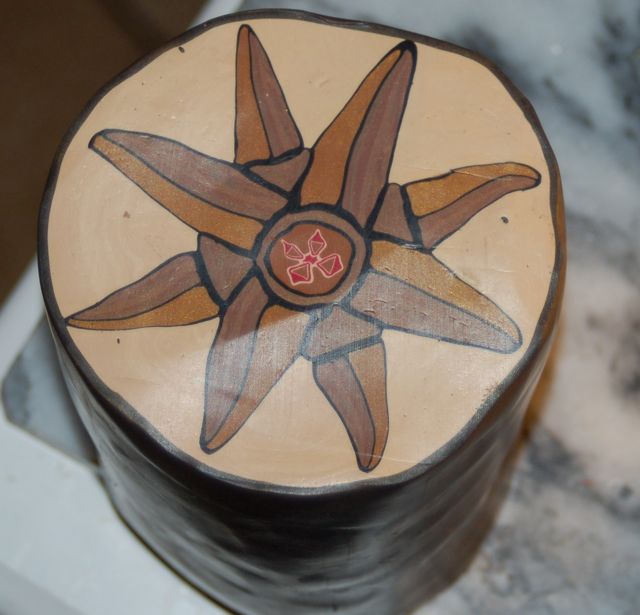 First I made the points of the compass rose. Then I put a bead that I already made, into the center.  I filled it in with tan clay. 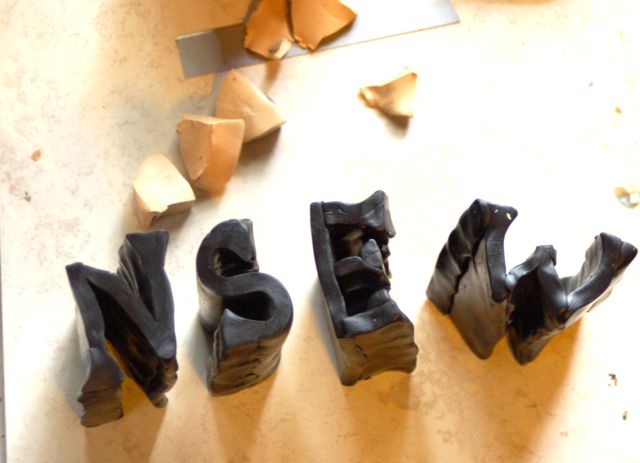 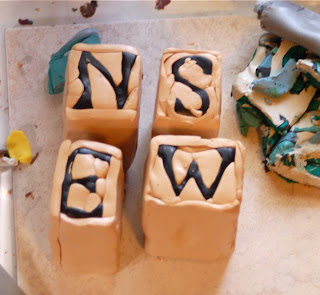 Next I made the symbols for North, South, East and West and then filled them in with tan clay. I reduced them and made more symbols for Northeast, Southeast, Northwest and Southwest and arranged them around my compass rose with lines separating them. 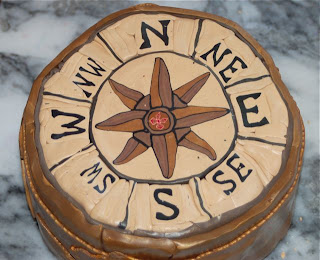 Above is the finished cane before I rolled it and the picture below is the reduced canes getting smaller. 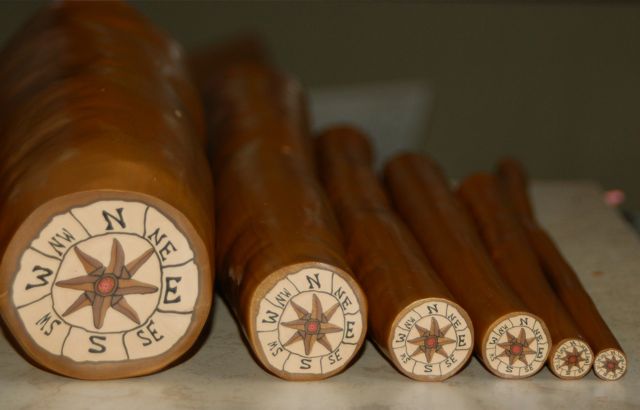 I still plan to open my shop in September! I will let you know what day that will be.  Sometime in the beginning- hopefully the first week.
Posted by Sarah Harkins at 10:38 AM 3 comments: 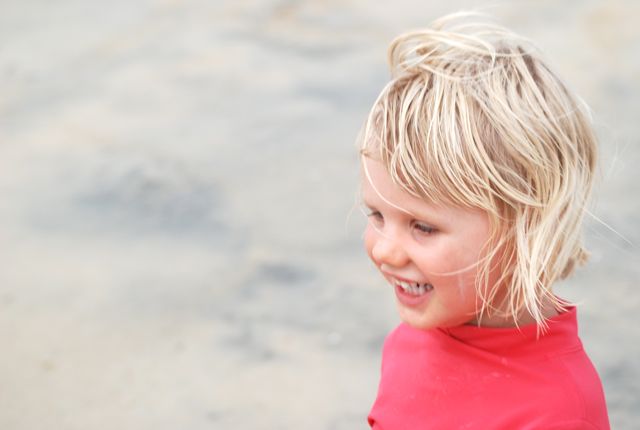 We just got back from our beach week in Ocean City, Maryland. My husband's deceased uncle has a condo on the beach that he left in the family. It's always a wonderful time.  As the kids get older, it's fun to see how they progress in their love for the wild waves and endless sand. 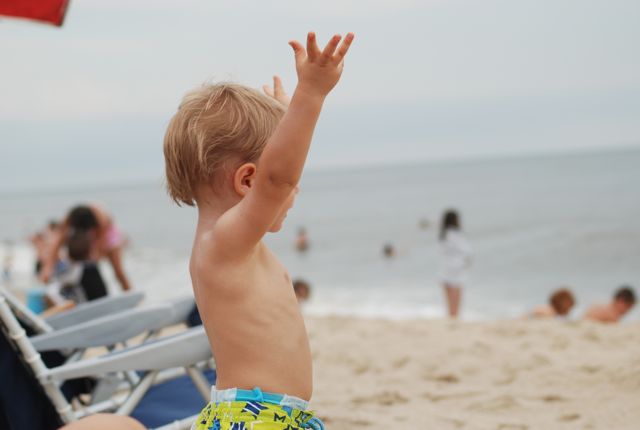 This was Jude's first response to the sheer magnitude of the ocean. "It's so big!" 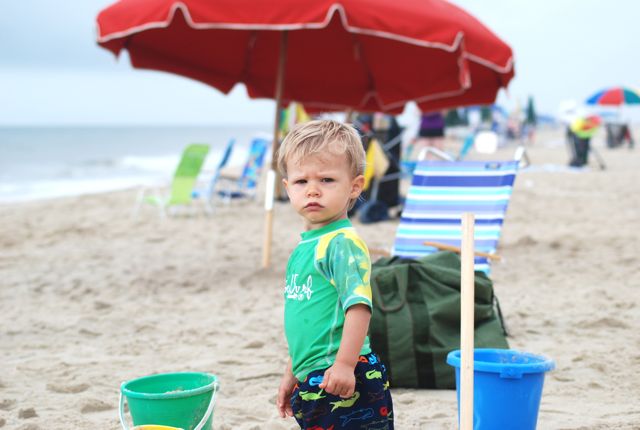 I think it was a bit overwhelming to him (the change in environment and schedule) because for the majority of the trip, this was his expression.  "I am not happy." It was unusual for my usually joyful boy. 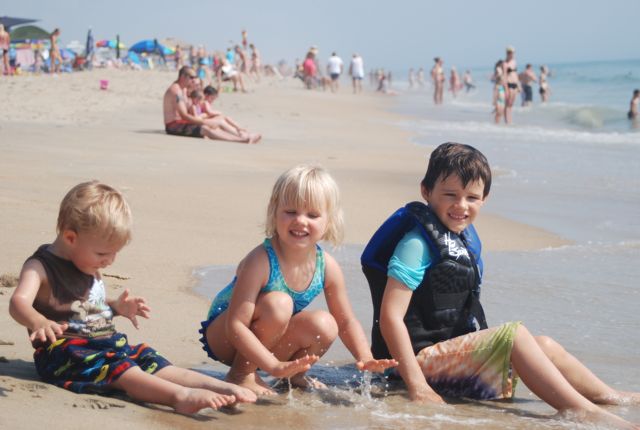 Analee had a great time, but spent most of it in the sand and in the pool. Our attempt to have fun in the waves together, ended in disaster as a big wave splashed over us (see below).  She's clearly not ready for that again! 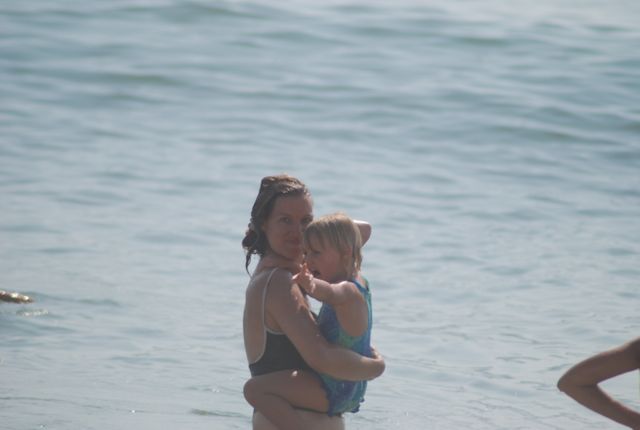 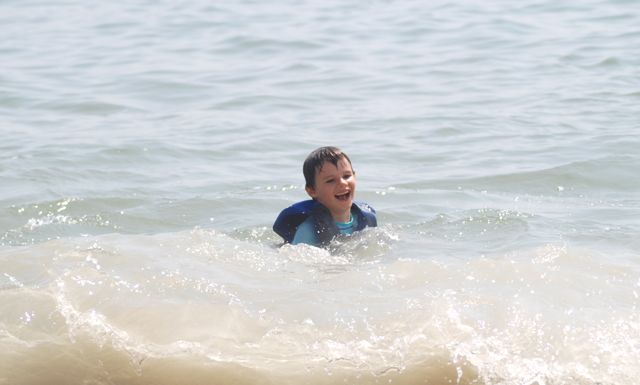 Each year, Liam gets more and more adventurous in the waves. This year he took his life jacket out there in the middle of them and had a blast being tossed about. 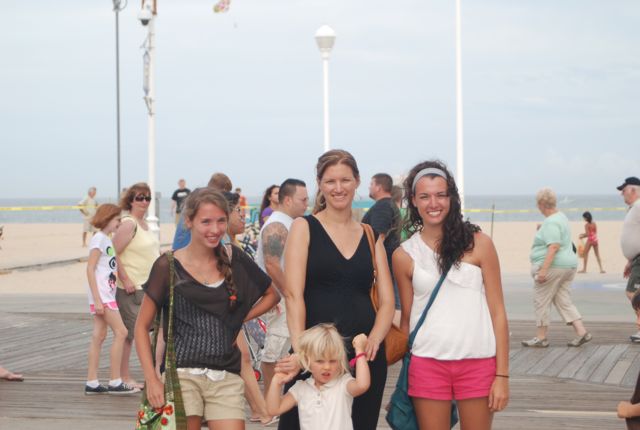 My sisters came too. Here's us on the boardwalk.  What a great week!
Posted by Sarah Harkins at 9:17 AM 2 comments:

Today I got one of the best birthday presents ever. I got to see my baby in the ultrasound! We found out she's a girl- which we all knew was coming. Ever since we found out we were pregnant, we knew it was going to be a girl.

Why? Because soon after Christmas last year, my three year old starts asking for a sister for next Christmas.   I thought it was rather amusing. I had no plans of having a baby by next Christmas, but still, I felt a little sorry for her.

Sisters are wonderful.  I should know. I have three amazing sisters and I don't know what I'd do without them.

Even though we had no plans of giving our daughter a sister for Christmas, children have a way of tugging at God's heart strings like no one else can, so when we found out we were pregnant, I knew why.   I looked at my daughter and said, "You got your wish!"  She wanted a sister for Christmas and she shall have one.  We are due mid December.  God's plans are always better than our own!

Please pray for a continued healthy pregnancy and good delivery!
Posted by Sarah Harkins at 8:42 AM 9 comments: