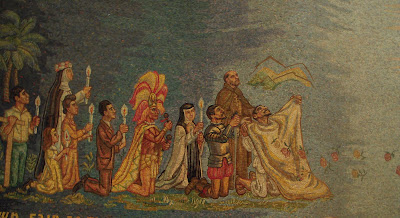 This was on the side of the walls- the roses lead the way to the Virgin. All mosaic art! 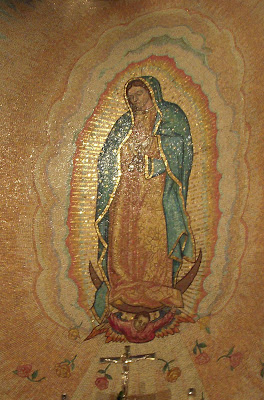 Our Lady of Guadalupe was in the middle of the mini shrine. Sooo beautiful!
While visiting my brother, Tom, in Washington, DC on Sunday, we toured the National Shrine. He said it is the fourth largest church in the world. I had been there once before, but visiting it again, I was more amazed than the first time. My favorite thing about the church were the mosaics-- which were everywhere- on the ceilings, floors, walls- basically, everywhere! The amount of work and skill that must have gone into making all those must have been massive. There were so many little shrines around the church, all with a different theme- mostly Mary themes. I found the shrine of Our Lady of Guadalupe, and of course, had to blog it! Unfortunately, my battery when dead after taking those pictures, so I wasn't able to take any more of our fun day. But it was a great day and I was so thankful to get to spend it with my brother.
Posted by Sarah Harkins at 5:51 PM No comments:

Day whatever for Mary Bead 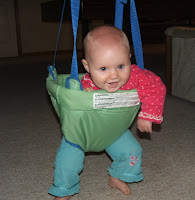 Analee after her nap- happily bouncing while Mommy works- she generously gave me about 10 minutes of work time after nap- this is actually pretty good for her! ( you see why this is taking so long!!)

The stars for Our Lady of Guadalupe Bead. Aren't they pretty? They were so fun to make!

I've lost count on days for Mary bead-most of the time I work on it, it is rather uneventful- mixing clay colors, making clay more pliable, etc. Today I decided to take a couple pictures of my progress. The star were fun. I'm sure you can guess what they are going to be for- if not, you'll just have to wait :)
Posted by Sarah Harkins at 5:20 PM No comments:

Yesterday, Eric, I and the kids drove 2 1/2 hours down to the new house we are soon going to own. The house is a little bit of a fixer-upper, so we've been working hard to get everything ready we need to do before we can move in. One of the things we needed to do yesterday was to take some measurements for new windows. Once we got down to the vacant house, Eric started to measure the windows, but he was having a hard time since the frames were different than what he was expecting. Unsure of his measurements, he headed downstairs to measure the basement windows. On his way down, he said a little prayer that he was measuring them correctly. Once we order them, there's no way to return them. The basement windows were even more troublesome than the ones upstairs. He wasn't sure if he could even replace them. Then, out of the blue, we heard a knocking on the door. Who could be knocking on this vacant house?? Eric went upstairs to answer the door. It was a window guy sent by the bank (who own the house) to fix the broken windows downstairs. We had no idea this was even in the contract! The man was able to help Eric with his measurements, and he was going to fix the downstairs windows, so Eric didn't have to worry about them at all! Coincidence? Perfect Timing? I don't think so! I am wondering whether this was a man or an angel! When I saw him, he waved and smiled at me like he knew me. Strange.

That was my "God" moment. There is no doubt in my mind, that God speedily answered Eric's prayer and showed up at the door with an answer. Thank you, God for answered prayers and small miracles!
Posted by Sarah Harkins at 10:23 AM 1 comment:

Day 8 of Guadelupe Bead and fun with kids 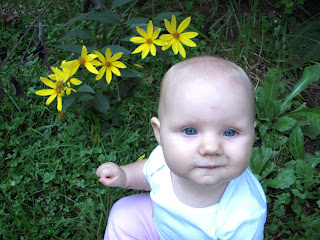 I love to take pictures of Analee showing off her crystal blue eyes. 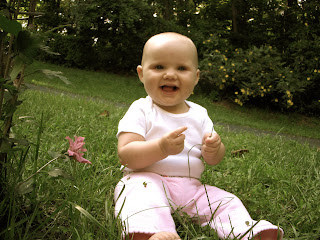 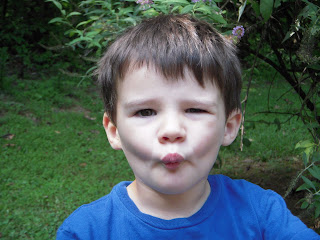 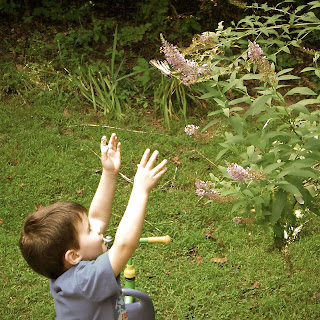 He likes to try to catch the butterflies on the butterfly tree. There are so many of them right now. 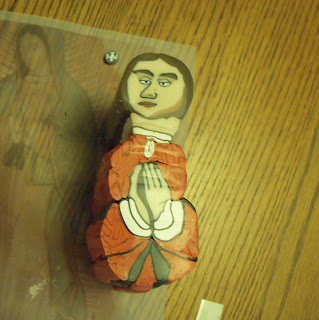 Day 8 of Guadelupe bead. I also mixed some blueish green clay together for her robe.
Posted by Sarah Harkins at 2:19 PM No comments: